TERVETULOA! > THE GLOBAL ECONOMY IN BIBLE PROPHECY > 1. Some indicators show that the U.S. economy is worse off than just before the Financial Crisis 2008

1.  Some Indicators Show that The U.S. Economy Is Much Worse Off Than Just Before the Financial Crisis 2008

Over the past 40 years, the total amount of debt in the United States has increased to astronomical heights.  The U.S. People has become a “buy now, pay later” society with destructive consequences.  Back in 1975, the total debt level was sitting at about 2500 milliards dollars, and today it is rapidly closing in on 60 000 milliards dollars. 47 percent of all Americans could not pay an unexpected $ 400 emergency room bill without borrowing the money from somewhere or selling something.  Total household debt in the U.S. has now reached a grand total of 13 000 milliards dollars. The total amount of corporate debt in the U.S. has nearly doubled since the end of 2007

When an economy is healthy, money tends to change hands and circulate through the system quite rapidly.  So it makes sense that the velocity of money fell dramatically during the last recession 2008. But why has it kept going down since then?

Something is wrong with the US Society? Traditionally, owning a home has been a sign that you belong to the middle class.  And the last recession 2008 was really hard on the middle class, so naturally the rate of homeownership declined during that time frame.  But why has it continued to steadily decline ever since? The explanation is obvious: a) the labor force participation rate has fallen substantially since the end of the last 2008 recession, b) the decline of real median household income has continued. In America today, most Americans do not make enough to support a middle class lifestyle on a single salary. Ang we  know that more and more people are working in part-time jobs because that is all they can find in this economy. 39 percent of American workers make less than $20 000 (19 000 €) a year.

Inflation is defined as a sustained increase in the general level of prices for goods and services. It is measured as an annual percentage increase. Although income is not growing, the cost of living just continues to rise steadily. For example, the cost of food and beverages has gone up nearly 50 percent just since the year 2000.

The middle class shrinks and the number of Americans that cannot take care of themselves is growing rapidly. So dependence on government’s social benefits is reaching heights never known before. For instance, the federal government is now spending about twice as much on food stamps as it was just prior to the last recession 2008. Approximately 60 percent of all US households get more in transfer payments  from the government than they pay in taxes. About 70 percent of all government spending now goes toward dependence-creating programs.

The market is in a bubble. And it is one of the largest bubbles in the last century, larger even than the 2007 bubble, which preceded the 2008 Crash. The single best predictor of stock market performance is the cyclically adjusted price-to-earnings ratio or CAPE ratio. CAPE adjusts for this by measuring the price of stocks against the average of ten years' worth of earnings. Corrected for inflation the CAPE is now at its 3rd highest reading going back to 1890. Only the 1929 bubble (Black Tuesday) and the Tech Bubble 2001 were more expensive relative to earnings. The ”funny” thing is that stocks have continued to rise even as corporate revenues have begun to fall. Right now, we are in the calm before the storm.  We are right at the door of the next great financial crisis, and most of the people that work in the industry know this. For example, consider what Hans-Jörg Vetter, the CEO of Landesbank Baden-Württemberg in Germany, had to say during one recent press conference: “Risk is no longer priced in. And investors aren’t paid for the risks they’re taking. This applies to all asset  classes: The stock and the bond markets are now both seeing ’the mother of all bubbles.’ ”

In spite of the massive national debt and the strengthening of the stock market the trend of Gross Domestic Product (GDP) growth rate is worrisome.

US Treasury notes or bonds are resold every day on the secondary market. During last years foreigners are dumping U.S. debt at a faster rate than we have ever seen before. This is potentially a problem, because the standard of living is dependent on foreigners lending money at ultra-low interest rates. Because the U.S. Government borrows the money to make interest payments, this could set off a chain reaction of paying interest on money borrowed to pay interest. At this rate it is leading to a national debt increase of the current $20 trillion (20 000 milliards) up to $95 trillion (95 000 milliards)  in 20 years. So unless there are some huge tax increases, a 5% increase in interest rates (which would still be below the long-term average) would increase the national debt by $75 trillion (75 000 milliards) dollars.

Apparently, if foreigners keep dumping bonds and the desire to own US bonds decreases, a major financial implosion of historic proportions is near within some years. We find below that a record $400 billion (400 milliards dollars) in Treasuries were sold in the last LTM period (Last Twelve Months). Could this seal the fate of U.S. Treasuries? 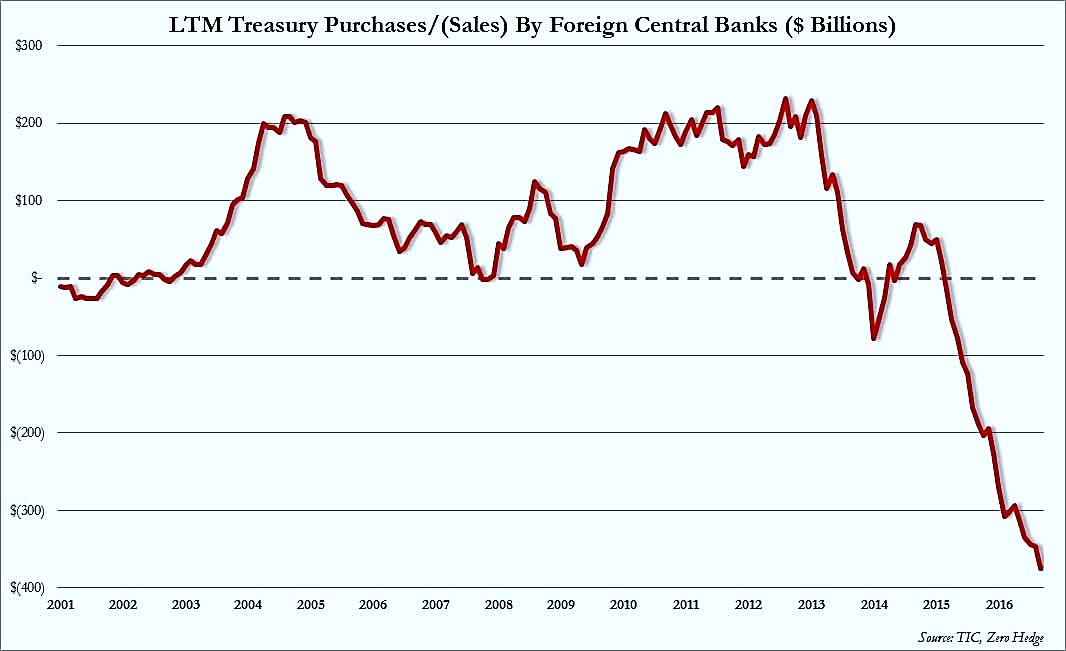 Among the biggest sellers not surprisingly is China. Chinese real behavior is still a mystery. There are at least four chances:

a) China has lost trust in the US Treasury to be able to continue to pay the interest rates due.

b) It needs the funds to prop up its financial system and the Central Bank of China.

c) It is undertaking an economic war with the US and this is the first shooting against America’s domination. China has noticed the US internal financial weaknesses.

d) China is considering a geopolitical action - for example in the South China Sea. The consequences could lead to a disruption between China and the United States — even war. In that case China would not wish to be holding Treasury-bills which the U.S. Government could make worthless.

In summary, all the 9 facts above may sound us: a new recession in the U.S. is coming. Unfortunately, once a new recession begins it may not play out like recessions normally do. Market confidence in The U.S. Government is weakening, investors are in the midst of one of the biggest stock market (and bond) bubbles in history, wasteful consumers lives under their personal dept burden, Europe with its banks and the Middle East is becoming more unstable with each passing day. Let there be no doubt that an economic crisis could literally erupt at any moment.